How Virgil Abloh Is Tapping Into Youth Culture And Democratising Fashion

What the creative polymath has achieved in his career is remarkable: he initially trained as an architect and first rose to renown as Kanye West’s creative consultant, but got his fashion education interning at Fendi before meeting Louis Vuitton’s artistic director, Kim Jones, sleeping on his sofa and “[forcing] him to teach me in his front room in Maida Vale". He founded Off-White in 2013, and its key codes have since become ubiquitous – notably, the ironic quotation marks around everything, strong emphasis on branding, and a heavy dose of post-modernism. But even more remarkable is the power he seems to hold over a young demographic that most powerhouses are struggling to engage.

What Abloh wants to do is to shatter the ivory tower exclusivity that often alienates people from fashion – and that is remarkably appealing to a group that, up until a couple of seasons ago, has been ignored by the higher echelons. After all, when he first entered into the industry, he was not welcomed with open arms: he was working with West, who was hardly taken seriously in the 2009 fashion industry, and the two of them got into about half of the Paris shows they turned up to. But, he explains, "We’re currently coming out of an era where high-fashion brands are inspired by us, and we’re just consuming what is registered back to us. With Off-White I made a conscious decision that I would not just be a consumer; I wanted to trailblaze and have one of us at the end of a Parisian runway saying, hey, put us on the timeline.” 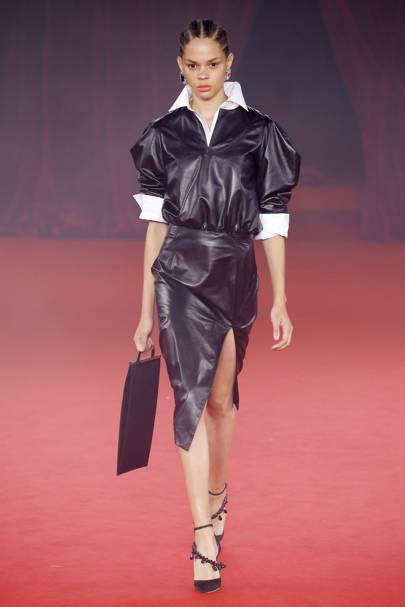 As well as championing the streetwear culture that he hails from, and which luxury fashion is leaning heavily on right now, what Abloh has tapped into is the collective sensibility that youth culture is really about. Abloh is a prolific collaborator, and an explicit champion of his heroes. “Who wants to be friends with the person who comes to the bar and is like, ‘me, me, me’?” he asks. “The people who are fun to hang out with are normally a collective.” So, when he takes inspiration from an artist or architect, he cites them, or when he gets one of his friends to take photographs of his work, he calls it a collaboration. After all, he says “it feels more modern to specifically cite your influences in fashion; like, you’re saying, ‘this is my squad.’”

Abloh has, throughout his career, made it very clear that he has a squad (when he distributed his new trainers to his friends – to Jones, Naomi Campbell, Drake, A$AP Rocky – they went viral on social media: a solid assertion your squad has your back), but that you’re welcome to be a part of it, too. Just enter a raffle, turn up to one of his DJ sets, come to a workshop, write him an email. Or, you know, buy a pair of trainers, a T-shirt, or a handbag. Whatever he’s selling, it’s working - and the best thing is, it doesn’t even seem to be a tactic.
Posted by FASHIONmode News at 12:15 PM