Gucci is in a collaborative mood this year. From its unexpected and brilliant union with Dapper Dan earlier this month and team-up with Angelica Hicks in May, to creative director Alessandro Michele's utilisation of Elton John's archives for his spring/summer 2018 collection (shown at Milan Fashion Week), it's proving that fashion is stronger together (its owner, Kering, even partnered with conglomerate rival LVMH recently on a model mandate, as well as Alibaba on curbing counterfeits). But it's always onwards and upwards at Gucci, and its new alliance has come courtesy of young artist Helen Downie - aka Unskilled Worker. 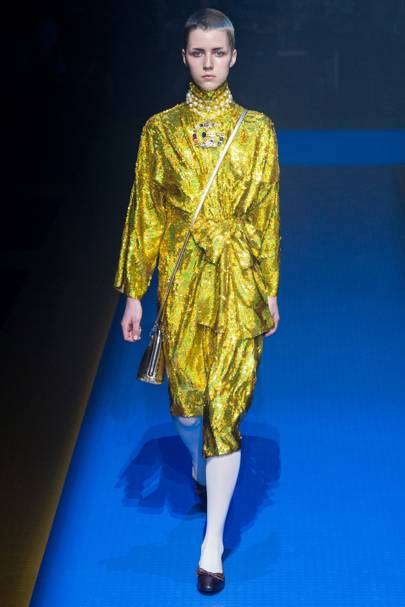 While the fruits of the collaboration - a 40-piece capsule collection of ready-to-wear, shoes, bags, silks and accessories - will shortly be available on October 11, its inception took place in 2015 when, after Michele discovered Downie's work on her Instagram account, he invited her to participate in Gucci’s No Longer / Not Yet art exhibition in Shanghai. As it launches, it will see a return to where it all started, as it becomes available in China at the same time as Europe, the US, Canada, the UAE, Japan, Australia and South Korea simultaneously.

Posted by FASHIONmode News at 12:12 PM