Following their latest couture collection, Vogue revisits this interview with Michael Russo and Tamara Ralph from the April 2017 issue, where the Australian-born couple discuss couture, dressing Angelina Jolie and creating a luxury brand that is also relatable. 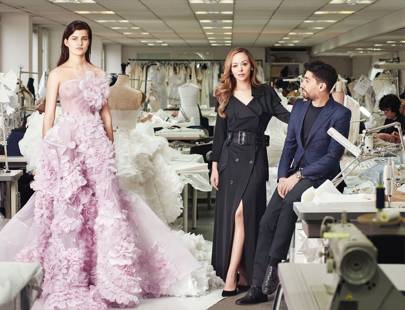 Our dress is on the front page of the Mail Online!” exclaims Michael Russo, tapping at his iPhone. He clicks on the story, and the headline flashes up: “Billionaire Russian oligarch spends £3.5 million on 19-year-old granddaughter’s wedding at swish London hotel.” “Mariah sang after Elton,” he confides. “And Antonio Banderas did some MCing.” Then he pulls up a photograph of a young girl who, at first glance, looks as if she is surfing on satin. “We made the bride her dress – multiple dresses, actually. 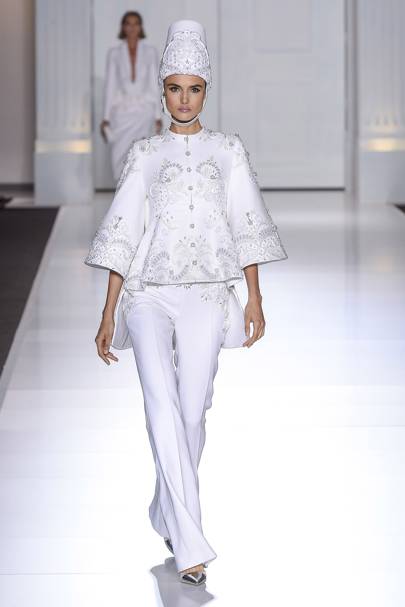 Russo has been to a lot of weddings, but the nuptials he is telling me about were among the most lavish. That’s what happens when you are CEO of Ralph & Russo, the British couture house with a client list running into the “thousands”, at least half of whom are princesses or sheikhas or their Hollywood equivalent. “Bridal is a large part of the business,” admits Tamara Ralph, creative director to Russo’s business brains (they are also engaged to be married). The other part is knockout couture: Angelina Jolie wore a Ralph & Russo suit to collect her honorary damehood; Gwyneth Paltrow wore their pink one-shouldered gown to the Oscars.

Their youngest client is three months old; their oldest is 80. All are received for fittings in a seven-storey maison in Mayfair; their nearby 200-strong atelier, a Sixties office block where more than 20 languages are spoken, can whip up a made-to-measure dress in six weeks. Can’t wait? Five boutiques worldwide (10 more are inked to open this year) hold custom-made gowns that can be tweaked. Ralph & Russo, it’s safe to say, are ruling the couture world – and they’re doing it from London. 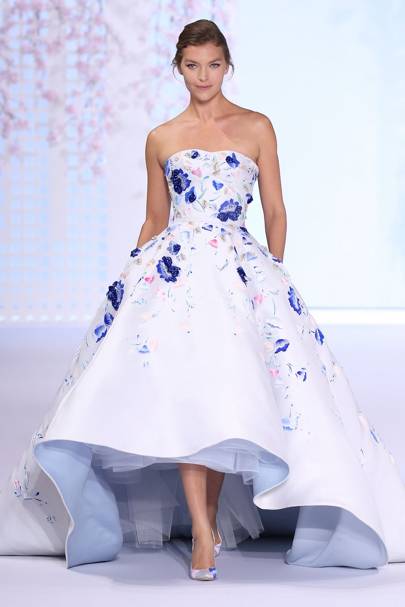 Paris is traditionally thought of as the centre of haute couture. But when the Australian-born couple set up shop in 2007, with one seamstress and an ironing board, they staked their claim on Knightsbridge. It proved a masterstroke. “Our clients actually like the fact that we’re in London – it’s very convenient,” says Russo. Besides, they ticked the Paris box in 2014, when Ralph & Russo was deemed of sufficient standing to grace the official Paris Couture Week show schedule, the first British couture label in a century to gain admittance.

Today they are one week away from presenting their spring 2017 couture collection, and the atmosphere is one of intense efficiency. A masseuse is making the rounds, cracking hunched 14-hour-day backs. Ralph selects a purple dress to be photographed: “Each silk-organza petal has been cut, curled with tongs and hair-sprayed, and applied by hand to eight sections that make up the gown.” Nine people have spent 1,000 hours labouring on this gown. “Half the spring dresses have pre-sold already,” says Ralph, who offers a preview to a handful of clients, and guarantees exclusivity by only selling one dress to each region. “But my phone will start buzzing during the show as clients claim their looks.”

No wonder that next on the agenda is ready-to-wear, perfume and beauty, eyewear and, eventually, menswear – in addition to growing the leather goods lines launched in 2016. “We want to play in every product arena,” says Russo. What’s the secret to their success? “The brand is luxury but it’s also relatable. It’s important that our clients see us as approachable.” Approachable is a relative term – but it’s obviously working.

Posted by FASHIONmode News at 9:28 AM