Kate Moss and Sadie Frost feted Liv Tyler’s 40th birthday with a weekend of countryside revelry alongside their partners and children.

Frost took to Instagram to post a picture of Moss and Tyler sitting outside a teepee, with the caption “'happy birthday @misslivalittle, what a lovely day!'” Moss, who was clad in an embroidered waistcoat, complete with arm bracelet, neck chains and round sunglasses, looked just the part for the bohemian country celebrations.

Frost, meanwhile, found home in a wicker pod and kept herself sheltered from the sun. “This is my idea of heaven.. weekend in the country in a pod! Sheltered from the elements,” she captioned the post. 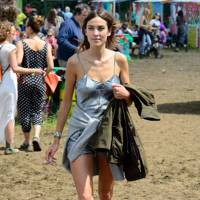 The idyllic day played out into an evening of dressing up for the Primrose Hill set, who were famed for partying together in West London in the Nineties. Tyler posted a video of herself wandering through the grass wearing a flowing, semi-sheer maxi dress followed by Moss, on her hands and knees, with a cigarette in her mouth. Tyler affectionately called her model friend, whom she has known for 25 years, a “sexy tiger”.

The birthday celebrations also called for flashback photographs, with Tyler and Frost remembering soirées from years gone by. You can take the revellers out of Primrose Hill, but the party will still find them.

Posted by FASHIONmode News at 12:44 PM