A week after  after Farfetch announced that it has partnered with Condé Nast to absorb the publishing house's e-commerce venture Style.com, the brand has announced another partnership with Jd.com, China's largest retailer, to expand its presence and business in the region.

In a press release sent this morning, the brand states that the union opens "a gateway to an $80 billion market" and "leverages JD's unparalleled logistics, internet finance and technology capabilities and social-media resources, including its WeChat partnership, with Farfetch's leadership in global luxury, to create a frictionless and seamless brand experience". While Farfetch already operates in the region offering 200 luxury brands and more than 500 multi-brand retailers the virtual space to sell their wares, its union with Jd.com will ensure heightened awareness and, it envisages, an "unparalleled luxury proposition".

As a result of the partnership, JD.com is now one of the largest shareholders of Farfetch (with investments totalling $397 million), and Richard Liu, JD.com's founder and CEO, will join the Farfetch board. Last week, as a result of the Style.com deal, Condé Nast International chairman and CEO Jonathan Newhouse also became a board member, joining Natalie Massenet who was appointed non-executive chairman in April.

"I am humbled and honoured to have one of the internet's most legendary entrepreneurs, Richard Liu, join our board, alongside Natalie Massenet and Jonathan Newhouse," said Farfetch founder, co-chairman and CEO José Neves. "We are honoured to have the advice and guidance of China's premier e-commerce guru as part of our highly experienced team, sitting around the same table as the world's luxury online pioneer and one of the world's pre-eminent publishers." 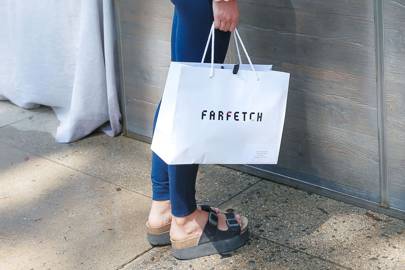 To coincide with the Jd.com news, Farfetch has also announced that it will be employing the digital marketing technology platform BlackDragon, to help it to maximise the potential that Jd.com's "treasure trove of data" holds and no doubt contribute to the efficiency of its Store of the Future (which was announced in April) as it increases its presence in the Chinese market.

"China is the world's second largest luxury market, and we are delighted to have such a respected partner, known for its strict protection of IP, with whom to address Chinese luxury consumers," continued Neves. "This partnership addresses the market's challenges by combining the Farfetch brand and curation with the scale and influence of the foremost Chinese e-commerce giant. This strategic partnership will provide brands a seamless, immediate access to the luxury consumer and Chinese luxury shoppers with access to the greatest selection of luxury in the omni-channel way of life they have already fully embraced."

This latest announcement move further cements Farfetch's growing reputation of being the leading innovator in the online shopping arena. In the last two years alone it has enjoyed series E round of funding (which saw it valued at $1 billion in 2015, following investment of $86 million); bought Browns Fashion from Joan Burstein; enlisted the indomitable force that is Natalie Massenet as non-executive co-chairman; and announced its Store of the Future - an augmented retail solution that "links the online and offline worlds, using data to enhance the retail experience".
Posted by FASHIONmode News at 5:19 PM