Chastain wore a custom-made strapless white gown with embroidered bodice and floor-sweeping skirt with beaded overlay. Though rumours suggested that it was created by Riccardo Tisci, due to the designer's attendance at the ceremony, the Alexander McQueen press office has now confirmed that the timeless piece was created for Chastain within the British fashion house. 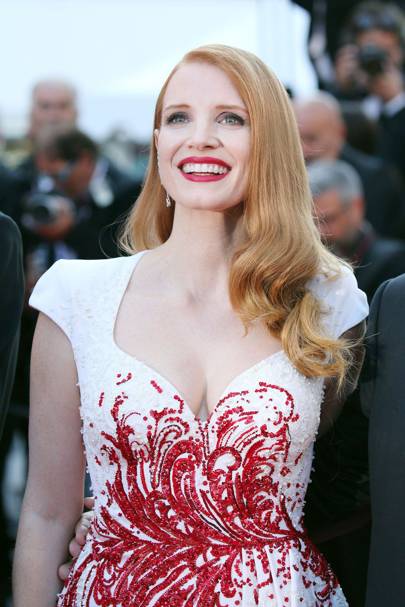 Tisci was joined in Treviso by a coterie of fellow actresses and fashion elite. A Valentino-clad Anne Hathaway was flanked by husband Adam Shulman and Emily Blunt, who opted for vibrant Peter Pilotto for the service. Incoming British Vogue editor, Edward Enninful was kept company by Moncler chief executive officer Remo Ruffini, Giorgio Armani’s niece Roberta Armani and socialite Bianca Brandolini d’Adda, who wore Azzedine Alaïa. Some of stylish clan were spotted partying in Venice on the evening prior to the wedding.

The fashion circle is not alien to Passi de Preposulo, who currently manages the celebrity and events department of Italian label Moncler. He cut his teeth at Giorgio Armani as director of public relations. The Passi de Preposulos, meanwhile, hail from Italian nobility that dates back over 1,000 years, and produce their own prosecco, Prosecco di Villa Tiepolo Passi. Passi de Preposulo has been dating Chastain since 2012.