She may have had the most famous model line-up compared to her peers when she presented her Central Saint Martins graduate fashion collection, but Stella McCartney has admitted that she recalls the moment that Kate Moss, Naomi Campbell and Yasmin Le Bon hit the catwalk (and subsequently the following day's headlines) with mixed feelings.

"I look back on that moment and feel a bit embarrassed that I was so naive," she told Kirsty Young on BBC Radio 4's Desert Island Discs. "They were my mates and that's who I was hanging out with at college. Kate was even living with me for a period of time and that was what I was engaging with outside of my college life, so when it came to choosing the models for my degree show, I thought, 'Well I might as well ask my friends'. I can understand why it was headline news and may have pissed my fellow students off a tad, but it was a very Brit moment."

The designer continued that she thinks the famous trio would have probably walked for any of the budding designer if they had asked them to as they were "were travelling the world representing Great Britain" and thought, "'Yeah we'll do a degree show for Britain'", before Young reminded her that they were famously the generation of models who said that they wouldn't get out of bed for less than £10,000 a day. "Yeah, who am I trying to kid?!" laughed McCartney, "Scrap that, edit it out!" 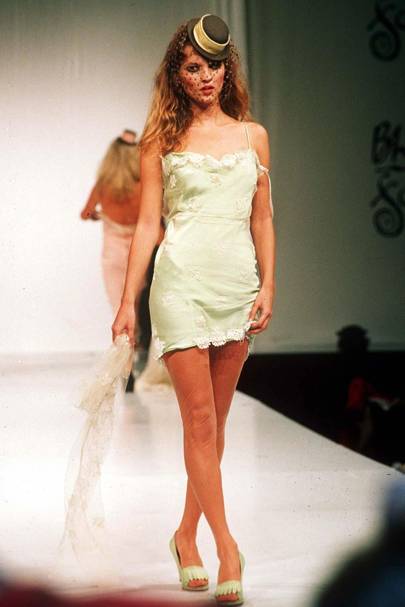 In the one-hour radio show, McCartney also disagreed with Young that buying expensive clothes is trying hard, saying, "I think that you have to wear the clothes and not let the clothes wear you. I think it's really important to take control of your wardrobe. Women choose to buy my clothes, I don't make them buy them," and revealed how proud she feels of seeing her designs on women in the street

"I'm really embarrassing and go up to people in the street and say, 'Nice bag!'... for me it's an achievement. I'm not interested in landfill, I'm interested in re-use and continuous design. Staying power in every sense of the word is really important."

She also touched on female designers in the industry when Young name-checked Miuccia Prada, Donna Karan, and Sarah Burton as a handful of women at the top of design.

"That's a historical one," said McCartney of why there aren't more. "I think when I came into fashion it was even less, probably. I think it was the idea that the men in the boardroom chose the men in the design room, possibly. I think maybe women felt more comfortable with men dressing them, but I think that's changed. Women designing for women is really powerful and really important. There are very few of us, not enough of us. I've always said that behind a great man, there are many, many great women... There's a lot of very impressive women working in the fashion industry but behind the scenes."

Posted by FASHIONmode News at 2:26 PM