Tyra Banks has removed the upper age limit on America’s Next Top Model. The model and entrepreneur said that she is constantly petitioned by hopefuls who don’t meet the nine-year age range to apply for the competition, and has decided the time is right to make a change.

"You know I've stood for diverse beauty and erasing cookie-cutters when it comes to what is deemed beautiful,” Banks told her Instagram followers. “There have been 23 cycles of America's Next Top Model and every single cycle, we say, ‘You have to be 27 years old or younger.’ You know what I hear all the time? 'Tyra, come on! Why have an age limit?' So you know what? I'm taking that age limit off. You want to audition for America's Next Top Model? I don't care how old you are, honey, you just need to know how to smize and be open to learning how to work the runway like a supermodel."

The model, who has been the head judge for 22 of the shows 23 series so far, relinquished her role last season in favour of an executive producer role. Rita Ora took the helm in her place, on a panel that also included Vogue cover girl Ashley Graham, but Banks confirmed last month that she will return as host and head judge when cycle 24 begins in the summer. 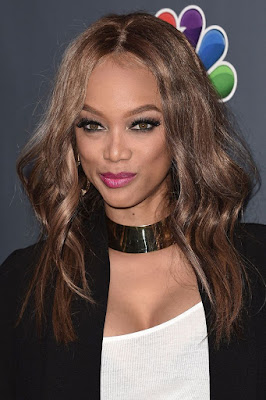 "I'm overwhelmed and humbled by the intensity of the ANTM fan base whose deep affection for the show led me to have a change of heart," Banks said in a statement at the time. "After giving it a lot of thought, I realised that remaining behind the camera wasn't enough because ANTM is woven into my DNA."

The move comes following a season that saw models of all ages take to the catwalk for some of the fashion calendar's biggest shows. Models in their forties and fifties walked at Bottega Veneta, Dolce & Gabbana and Dries Van Noten, among others, underlining the need in the industry for new faces that are not in their teens or twenties.

Posted by FASHIONmode News at 2:21 PM