Balmain Sets Its Sights On Your Casual Wardrobe

Balmain has enlisted a new CEO to replace 17-year veteran Emmanuel Diemoz. Massimo Piombini, whose appointment takes immediate effect, aims to take the company’s aesthetic to an even broader audience. Fans of the brand may wonder how it might be possible to reach any wider than £5,000 dresses and an H&M collaboration, but the new regime sees the brand entering the most casual areas of your wardrobe - including the denim it used to be famous for during Christophe Decarnin's tenure - as well as your partywear.

“We want to rethink casual luxury. We want to put more denims, we want to bring more jersey in the collection, knitwear - something more casual, but still keeping it couture and luxury,” creative director Olivier Rousteing told WWD. “You know the Balmain customer for being really rock n roll or hip-hop style or pop star, but I think we’re going to open Balmain to different kinds of ages, different kinds of men, and this is really important. I’m known for the superstar Balmain, but I think now it’s time for Balmain to show another aspect, and this is what excites me.” 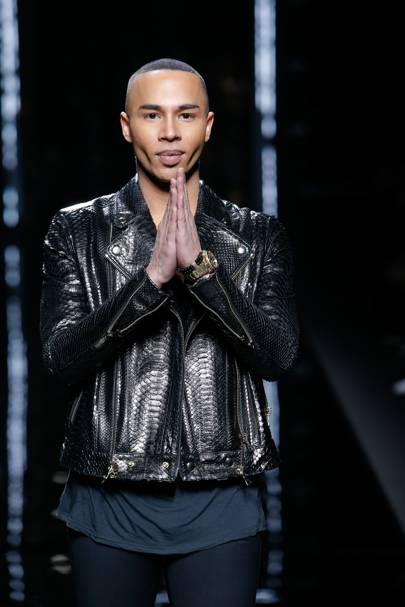 As well as helping Rousteing bring more “fragility” and “romanticism” to the usually unapologetically fierce and powerful Balmain woman, Piombini - who has previously held executive positions at Valentino and Gucci – is overhauling the company’s retail structure, as well as focusing on the growth of the brand’s new accessories.

“For us, it’s not difficult to open stores, but it’s more difficult to make stores work, so to make stores work we need the proper concept, the proper retail format, the proper retail culture overall. And this is something that Olivier and I will build together for Balmain’s future,” Piombini said. “There is a great opportunity in the market. Balmain is one of the best hidden secrets, because it’s not developed at full potential yet, and so with the support of Olivier and a structure that we have and that we are going to reinforce, I think we’re going to have a great future.”

Posted by FASHIONmode News at 2:26 PM