How  many leather jackets does one need? Or if not "need", then how many can a person reasonably justify owning before the shopping police come calling? Three? Five if you're counting sheepskins or are brave enough for a coloured option? It seems that if you ask the Victoria's Secret Angels, Gigi Hadid, Kendall Jenner, Rosie Huntington-Whiteley or Blake Lively - you can never have too many if they're from Nour Hammour. Almost every member of clan Kardashian-Jenner owns one, and one of the world's most famous singers owns two or three, but the brand has flown under the radar until now. While the little-known label used to produce only bespoke orders - often for well-known names - in its Parisian atelier, it now boasts a ready-to-wear offering, which means the model secret is out.

"Models these days have such busy schedules, they travel non-stop and are constantly running from shows to dinners to parties – they need key pieces that they can just throw on to pull together an outfit without putting too much effort into something so stylised," one half of the design duo behind Nour Hammour - American ex-pat Erin Conry Webb - told us. And while that's certainly true, there are hundreds of other leather jacket labels that they could choose to wear, so what's so special about this one right now? Turns out that je ne sais quoi is tricky to pinpoint.

"Our client wants to stand apart, but also retain the Parisian aesthetic of chicness and wearability,” Webb shrugged. “She just throws on a jacket over her T-shirt and is ready to go out to a dive bar or a five-star restaurant." Accessorised presumably with a handsome but surly musician, or gaggle of equally beautiful friends.

Wandering backstage at the Victoria's Secret show, it was impossible to miss the jackets worn by Angels galore - some embellished with their name in studs on the back and lined with pink rabbit fur, others more subtle in grey or black but obviously much loved - and they are definitely not your standard fare. The jackets adopt a more-is-more approach to outerwear and, while plain black leather styles do exist, what's keeping fans coming back for more than one (despite the not insignificant price tag) is the fact that it is an outfit all of its own. Perfect for standing out as you're stalked by a street-style photographer, or turning heads as you walk through the aforementioned restaurant, these are jackets with fanfare built in: fringes, studs, tassles, straps. Wallflowers need not apply. 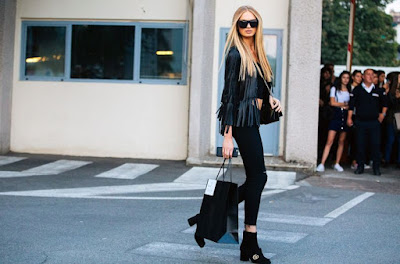 Conry Webb launched the brand with fellow founder Nour Hammour - who lends her name to the label - and the duo have been taken aback by its success among some of the world's most beautiful women. Nice though that is, they're focusing on the roots of the label - and why they launched it in the first place.

“We wanted to make the perfect leather jacket collection and all of our jackets are designed, hand-cut, produced, and studded in Paris,” Hammour explained. “It was important for us to capture the savoir-faire of this leather industry that is slowly disappearing from the city. To do that we chose a team who are all specifically specialised in leather and outerwear. The artisans we work with have been in the industry for over 30 years and they are true artists when it comes to leather and the shape of a woman's body. This is why we concentrate on one product - for now.”

Eventually, a ready-to-wear line and the (probably quite attainable) dream of dressing Beyoncé are in Nour Hammour's future, but for the moment the duo will focus on making leather jackets that make supermodels look even more super.