Schiaparelli has officially been awarded Haute Couture status by the French Ministry of Industry and the French Couture Federation, the brand confirmed this morning. Despite showing its collections during Couture Fashion Week each season since its high-profile relaunch in 2014, the fashion house has only enjoyed guest status until now.

"Celebrating its 90th anniversary this year, the house of Schiaparelli - created in 1927 by Elsa Schiaparelli - recovers the official Haute Couture label that had disappeared when its namesake founder decided to close her couture house in 1954 in order to write her autobiography, Shocking Life," read a statement from the brand. "Today Schiaparelli’s unique spirit of Haute Couture merging art, innovation, craftsmanship, quality and audacity enters a new chapter of its story." 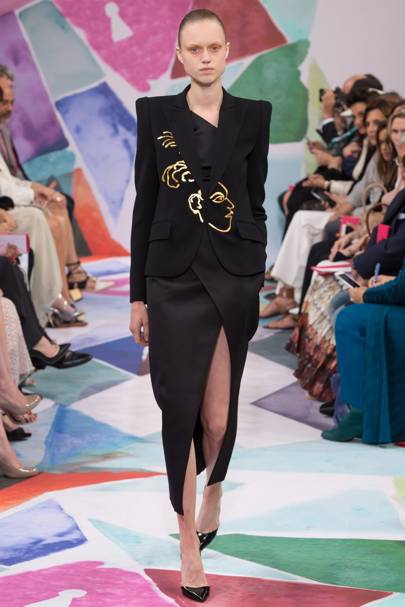 Creative director Bertrand Guyon - who was brought on board in 2015 from Valentino, after Marco Zannini's short-lived tenure - won praise from fashion editors for his last couture collection shown in July.

Looking back to the Surrealist roots of the house with a fantastical-inspired collection based on the circus, Guyon was heralded as being the right "man to resuscitate brand Schiap", according to Vogue international editor Suzy Menkes.

Alongside Schiaparelli, Julien Fournié was also given Haute Couture status today, ahead of the spring/summer 2016 couture shows which are slated to start on Sunday, January 22nd.

Posted by FASHIONmode News at 1:35 PM