The Angel Line-Up: Who's Missing?

With fewer than six days to go before the Victoria's Secret show hits Paris, the countdown to the annual extravaganza is well and truly on. While our Instagram feeds are filling up with models confirming that they will be walking, the brand has hinted that two of its most famous faces might be missing from the line-up this year.

Behati Prinsloo and Candice Swanepoel - who were given their wings in 2009 and 2010 respectively - are not included in the Angels listed on the fashion show section of the Victoria's Secret website, which could provide the answer to much speculation as to whether the pair will take to the runway just a couple of months after they both became first-time mothers.

Prinsloo and husband Adam Levine welcomed their daughter, Dusty Rose, in September, while Swanepoel announced the birth of her son, Anacã, with fiancé Hermann Nicoli in mid October. 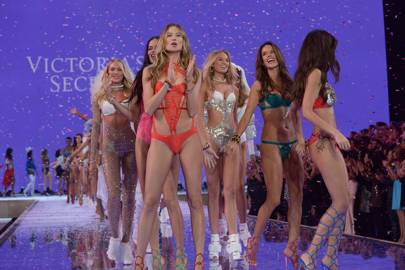 The pair, who revealed their pregnancies via Instagram within days of each other earlier this year, are two of the lingerie label's most high-profile stars. When the news broke of their imminent arrivals, the brand's chief marketing officer, Ed Razek, suggested that they planned to be back to work in time for the show. The executive, who oversees the show, posted a picture of the models on social media captioned: "I am so happy for these two amazing beauties and mums to be! See you at the fashion show Angels!"

Current Angels Adriana Lima, Alessandra Ambrosio, Lily Aldridge, Elsa Hosk, Jasmine Tookes, Josephine Skriver, Lais Ribeiro, Martha Hunt, Romee Strijd, Sara Sampaio, Stella Maxwell and Taylor Hill are all listed in the line-up for this year's catwalk show, which is to be held in the French capital's famous Grand Palais venue next Wednesday. While Prinsloo and Swanepoel are missing - as are Kate Grigorieva and Jac Jagaciak - we can't help but wonder whether they will give us an angel delight with a surprise appearance on the night.Victoria's Secret Confirms Lady Gaga.

Posted by FASHIONmode News at 3:32 PM